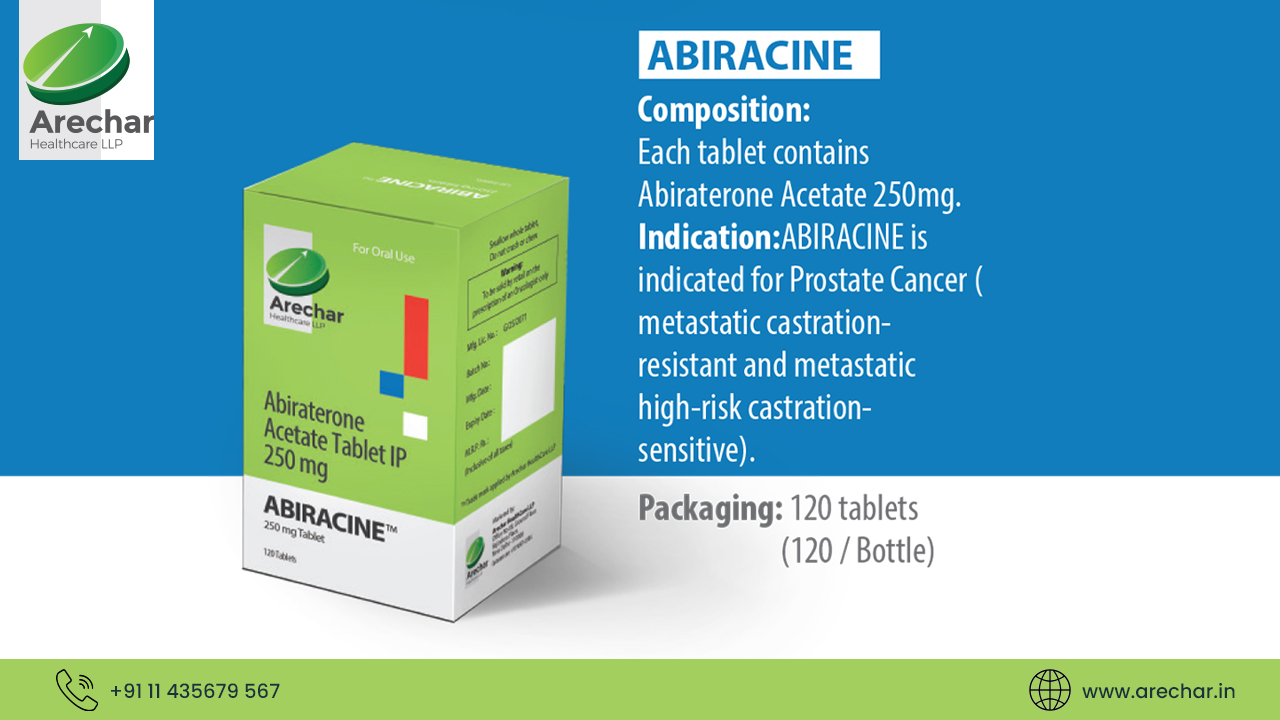 All about Abiracine (Abiraterone acetate) tablet

Abiracine is an anti-cancer prescription medicine, comprising Abiraterone Acetate. The compound works as a partial antagonist of the Androgen Receptor (AR). It works to prevent the production of androgen (male hormone) in men. It inhibits the CYP17 enzyme that is responsible for producing androgen.

The clinical relevance of a drug tells about its significance in the medical field and its relevance in the treatment of diseases. It is important to know the indications/relevance of the medicine before administering it. Abiracine tablets are used in the treatment of  Metastatic Castration-Resistant Prostate Cancer (mCRPC) and metastatic high-risk Castration Sensitive Prostate Cancer (mCSPC). It is prescribed for use in men with a glucocorticoid medication like Prednisone.

Abiraterone Acetate (Abiracine) is associated with the decreased levels of PSA, shrunk tumor (as calculated by RECIST criteria), radiographic regression of bone metastases, and a notable improvement in pain. Levels of adrenocorticotropic hormones get increased up to six-fold but this may be suppressed by Dexamethasone.

Abiraterone Acetate, an orally active inhibitor of the steroidal enzyme, works to inhibit CYP17A1 selectively and irreversibly with the help of a covalent binding mechanism. CYP17A1 is an enzyme that tends to catalyze the biosynthesis of the androgen. It is majorly expressed in adrenal, testicular, and prostatic tumor tissue. More precisely, the compound works to inhibit the conversion of 17-hydroxypregnenolone to dehydroepiandrosterone (DHEA) by the enzyme (CYP17A1) in order to decrease serum levels of testosterone and other androgens.

Abiraterone’s plasma protein binding is more than 99% in human plasma. The average distribution volume is about 19,669 L, which suggests that the compound extensively distributes to peripheral tissues.

In man, Abiraterone acetate (AA) is rapidly hydrolyzed to Abiraterone(ABT). The major human circulating metabolites are sulfated ABT (ABT14 S) and the N-oxide of ABT-S. In vitro, the evaluation of the metabolic stability of C-AA and -ABT was done in the human stomach mucosa, human hepatocytes, human and dog intestinal subcellular fractions, and human blood. The combination of in vitro phenotyping data shows that esterase-mediated hydrolysis took place in gastrointestinal tissue. Hence, ABT (instead of AA) is the main entity being absorbed from the intestine, which is further sulfated and oxidized mainly in the liver to ABT-S and N-oxide ABT-S.

Based on data from healthy subjects, the mean half-life of Abiraterone Acetate in plasma is about 10.3 hours. After orally administering C-abiraterone acetate 1,000 mg, about 88% of the radioactive dose was excreted via feces and nearly 5% via urine. The major compounds present in feces were unaffected Abiraterone Acetate and Abiraterone.

From a phase I trial in 21 men with Hormone Refractory Prostate Cancer, it is evident that Abiraterone Acetate may be an effective hormonal therapy for Prostate Cancer. In this clinical study, treatment with this compound was associated with tumor shrinkage and a notable decrease in the levels of prostate-specific antigen in approximately 70% of patients. These variations were accompanied by several symptomatic improvements, like reduced pain.

Recommended Dose:- Abiracine is administered in the dose strength of 1,000mg (four tablets of 250mg each) on an empty stomach once daily while coadministering Prednisone 5mg twice daily. No food item should be consumed at least 2 hours before the administration of this medicine and at least one hour after the administration. The tablets should be swallowed with water as a whole. Do not cut or chew the tablets.

Overdosage:- No specific antidote for overdose of Abiracine is established by now. However, if you experience any symptoms of overdose, it is important to seek the emergency medical attention of a qualified medical practitioner. In such a case, a doctor will undertake general supportive measures such as monitoring for arrhythmias, cardiac failure, and assess liver function

Allergic reactions such as skin rash, swelling, pain, itching, and irritation may occur in some patients who are allergic to Abiraterone Acetate or any other ingredient of this medicine. Therefore, it is important to know the ingredients of the medicine beforehand to avoid such adverse effects.

Some patients also suffer from problems like insomnia and depression during the course of this medicine. A healthcare provider should be contacted immediately to know the appropriate ways of managing such effects.

DRUG DISCONTINUATION REACTIONS:- Sudden discontinuation of Abiracine may lead to an increase in aspartate aminotransferase (AST) and/or alanine aminotransferase (ALT). It may also cause the symptoms of cardiac failure and urosepsis (a urinary tract infection).

Reactions that may occur

Abiracine (Abiraterone Acetate) is available in the form of tablets for oral use in a high-density polyethylene bottle containing 120 tablets. Store the tablets at 59°F to 86°F (15°C to 30°C). Keep Abiracine tablets away from the reach of pets and children. Do not place it under direct light and heat. Protect from moisture. Know the ways to dispose of the used and expired packs of medicines from a pharmacist. Women who are pregnant should not handle Abiracine tablets without protection (gloves).