Medicine > All about Dasacine (Dasatinib) tablet 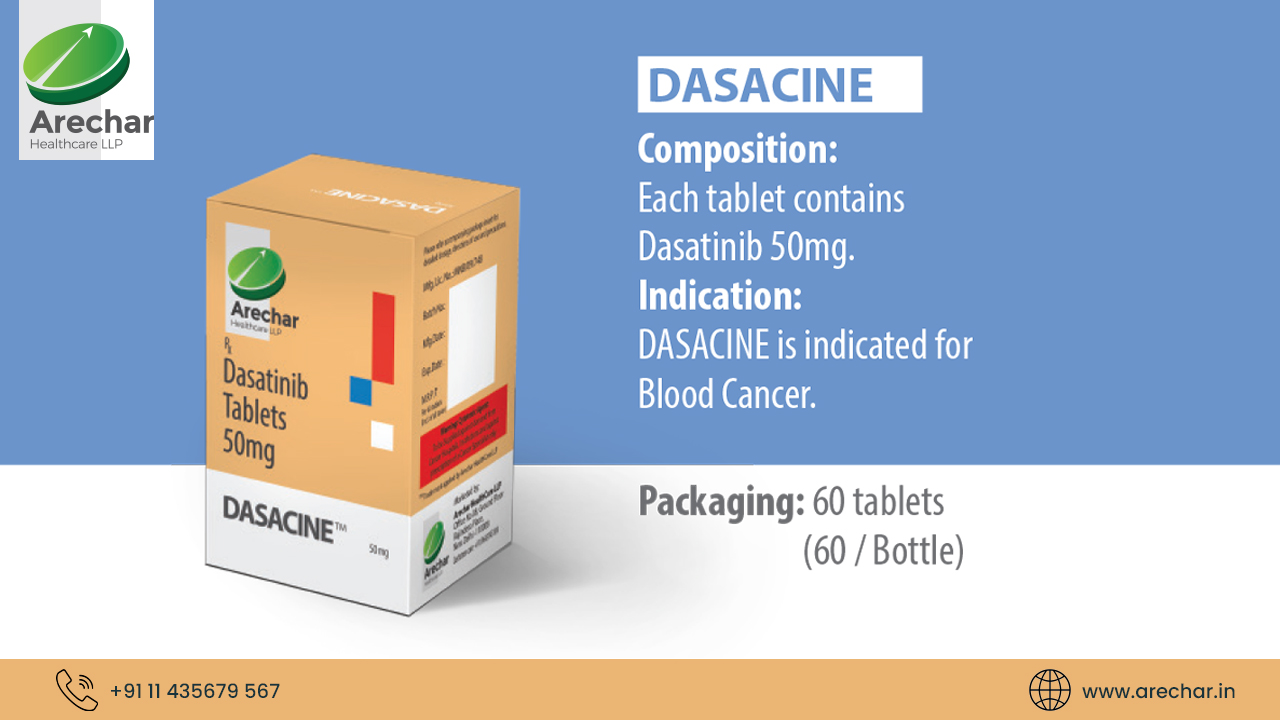 All about Dasacine (Dasatinib) tablet

Description:- Dasacine is an anti-cancer medicine marketed by Arechar Healthcare. It comprises Dasatinib and is used as a targeted therapy for the treatment of certain types of Blood Cancer.

Dasacine is an FDA-Approved anti-cancer drug. Its salt composition is Dasatinib 50mg. This medication is formulated as tablets (50mg/tablet) and is indicated for oral use only. It is a targeted therapy drug for certain types of cancers. Being a prescription medicine, it is used to treat Chronic Myelogenous Leukemia (CML) and Acute Lymphoblastic Leukemia (ALL).

Before using the medicine, make sure to read its indications carefully. Indications of medicine give a brief about its administration in different cases and its usages. Dasacine (Dasatinib) tablets are indicated for use in patients who are suffering from any of the following types of Blood Cancers.

Dasatinib is an oral multi-targeted kinase inhibitor. It belongs to the family of drugs known as Kinase Inhibitors. It is an inhibitor of breakpoint cluster region-abelson (BCR-ABL) and Src family kinases. Some of the aspects of the pharmacology of Dasatinib such as pharmacodynamics, results, metabolism, and mechanism of action are discussed below.

The evaluation of the pharmacokinetics of Dasatinib (Dasacine) has been done in 229 healthy subjects and 137 patients suffering from leukemia.

Dasatinib’s maximum plasma concentrations (Cmax) are noted between 0.5 and 6 hours (Tmax) followed by its oral administration. The overall mean terminal half-life of this compound is 3–5 hours. A study’s data of 54 healthy individuals given a single dose of Dasatinib of strength 100-mg, 30 minutes followed by consuming a high-fat meal resulted in a 14% increase in the mean AUC of Dasatinib. The observed food effects were not clinically relevant.

In individuals, the apparent volume of distribution of Dasatinib was 2505 L, which makes it clear that the drug is extensively distributed in the extravascular space. Dasatinib binding in vitro was about 96% and its active metabolite to human plasma proteins in vitro was about 93%, with no notable concentration dependence over the range of 100–500 ng/mL.

Dasacine, comprising Dasatinib, works to inhibit a number of kinases such as BCR-ABL, SRC family (SRC, LCK, YES, FYN), c-KIT, EPHA2, and PDGFRβ. On the basis of its modeling studies, Dasatinib is expected to bind to multiple conformations of the ABL kinase. In laboratory processes or Vitro, Dasatinib was active in leukemic cell lines and represented variants of imatinib mesylate sensitive and resistant disease. Dasatinib also inhibited the growth of leukemia cell lines including chronic myeloid leukemia (CML) and acute lymphoblastic leukemia (ALL) cell lines overexpressing BCR-ABL. Dasatinib was also able to overcome the resistance by imatinib resulting from BCR-ABL kinase domain mutations, activation of alternate signaling pathways involving the SRC family kinases including LYN and HCK, and multi-drug resistance gene overexpression under the conditions of the assays.

The introduction of tyrosine kinase inhibitors resulted in a notable change in the treatment of Chronic Myelogenous Leukemia (CML) because they tend to be superior to other treatments or therapies. The constant increase of effective therapeutic choices demonstrates a need for proper monitoring to decide the most-effective second-line treatment and the introduction of such therapy at the right moment.

The efficacy of dasatinib in the treatment of patients with CML or Ph+ALL who are resistant or intolerant to imatinib is evidently appropriate. The tolerability in the case of Dasatinib is satisfactory and most side effects that occurred due to Dasatinib were either mild or moderate and mostly reversible or treatable by monitoring, supportive care, or dose adjustments (increase or decrease).

The rates of Dasatinib discontinuation due to toxic adversities are low. There is no proper evidence of cross intolerance of Dasatinib with Imatinib. Therefore, Dasatinib is proved to be an effective and well-tolerated treatment option for second-line therapy to treat CML.

CYP3A4 Inhibitors:- Dasacine (Dasatinib) is a CYP3A4 substrate. In a study, when patients having solid tumors were administered Dasatinib with Ketoconazole, it was observed that there was a notable increase in Dasatinib Cmax and AUC. Therefore, close monitoring is necessary for patients to avoid toxicity. If CYP3A4 Inhibitors can not be avoided, dose adjustments (reduction) shall be considered.

CYP3A4 Inducers:- When Dasacine was administered with a single evening dose of Rifampin 600mg, a decrease of about 81% and 82% in Dasatinib’s Cmax and AUC respectively was observed. If CYP3A4 Inducers can not be avoided with Dasatinib, dose adjustments (increase) shall be considered.

Antacids:- In a study, when 24 healthy subjects were administered 30 mL of antacid (aluminum hydroxide/magnesium hydroxide) with a single dose of Dasatinib, a decrease of about 58% and 55% in Dasatinib’s Cmax and AUC respectively was observed. If antacid therapy can not be postponed or stopped during the treatment with Dasacine, dose adjustments (increase) shall be considered or the antacid should be administered at least 2 hours prior/later to the administration of Dasacine.

Immunosuppressive Agents:- Such medications are also known as immunosuppressants. These drugs are responsible for the inhibition or prevention of the immune system’s activity. Mostly, it is administered to patients undergoing organ transplants.

Dasacine (Dasatinib) is available in the form of tablets for oral use. Each bottle contains 60 tablets. Dasacine tablets should be stored at 68°F to 77°F (20°C to 25°C). Such medicines should be kept away from the reach of children and pets. Protect Dasacine tablets from direct light, heat, and moisture. Ask your doctor or pharmacist about the ways to dispose of unused or expired medicines.

The initial recommended dose of Dasacine for chronic phase CML is 100mg. However, for patients of accelerated phase CML, Ph+ ALL, or myeloid or lymphoid blast phase CML, the recommended starting dose is 140mg. In both cases, Dasacine should be administered orally once a day, either in the morning or evening. It can be taken with or without food. The tablet should not be crushed, chewed, cut, or broken in any case. It should be swallowed with water. In clinical trials, Dasacine was administered to the patients until the two cases happened: disease progression and intolerance by the patient. Sometimes, dose adjustments (increase or decrease) may be needed as per the effects of medicine on the body, individual safety, and tolerance.

Dasacine (Dasatinib) may cause some adverse reactions including Bleeding Related Events such as severe CNS hemorrhage, gastrointestinal hemorrhage, thrombocytopenia including fatalities. People who take medicines that work to inhibit platelet function or anticoagulants should administer Dasacine cautiously.

This medication is associated with retention of fluid, severe ascites, and edema. Other adverse effects include dyspnea and dry cough. Such symptoms should be evaluated by chest X-ray. The cases of fluid retention can, however, be easily treated by short courses of steroids.

Nervous System Disorders such as dysgeusia, syncope, convulsion, amnesia, transient ischemic attack, and tremor. Know more about such reactions on your nervous system from a pharmacist before the administration of this medication.

In some patients, Hepatobiliary Disorders may occur and last long. Some of the frequent disorders are urinary frequency, renal failure, and tumor lysis syndrome. The infrequent reactions are proteinuria and hypersensitivity.

The safety and efficacy of Dasacine in individuals<18 years of age have not been established. Therefore, it is not recommended for use in children.

Of the 511 patients in clinical studies of Dasatinib (dasatinib), 119 (23%) were over 65 years of age, while 13 (3%) were over 75 years of age. No overall differences in safety or efficacy were observed between these patients and younger patients. However, the greater sensitivity of some older individuals cannot be ruled out.

Dasacine tablets can cause fatal effects if administered to a pregnant female. It is not recommended for use during pregnancy. In non-clinical research, fetal toxicity was seen in rats and rabbits at plasma concentrations below those observed in humans receiving therapeutic doses of Dasatinib. Fetal death was observed in rats. In both rats and rabbits, the lowest doses of dasatinib tested (rat: 2.5 mg/kg/day and rabbit: 0.5 mg/kg/day) resulted in embryo-fetal toxicities. Such doses produced maternal AUCs of 44 ng•hr/mL and 105 ng•hr/mL in rabbits and rats, respectively. Embryo-fetal toxicities included a reduction in ossification (sternum; thoracic, lumbar, and sacral vertebrae; forepaw phalanges; pelvis; skeletal malformations at a number of sites (scapula, humerus, femur, radius, ribs, clavicle); and hyoid body), edema, and microhepatia.

It is not known whether Dasacine is excreted in human milk. Women who are administering Dasatinib should not breast-feed.

A few patients who are treated with Dasacine (Dasatinib) undergo reactions such as anemia, thrombocytopenia, and neutropenia. Therefore, regular monitoring of blood counts should be done. Several dose adjustments may also be needed in such patients.

In the patients of CML or Ph+ ALL, the most frequent site of bleeding was gastrointestinal. Some of the bleeding-related events were also associated with severe thrombocytopenia. In some patients, platelet dysfunction may occur with hemorrhage