Medicine > All about Emfovir (Tenofovir Disoproxil Fumarate and Emtricitabine) tablet 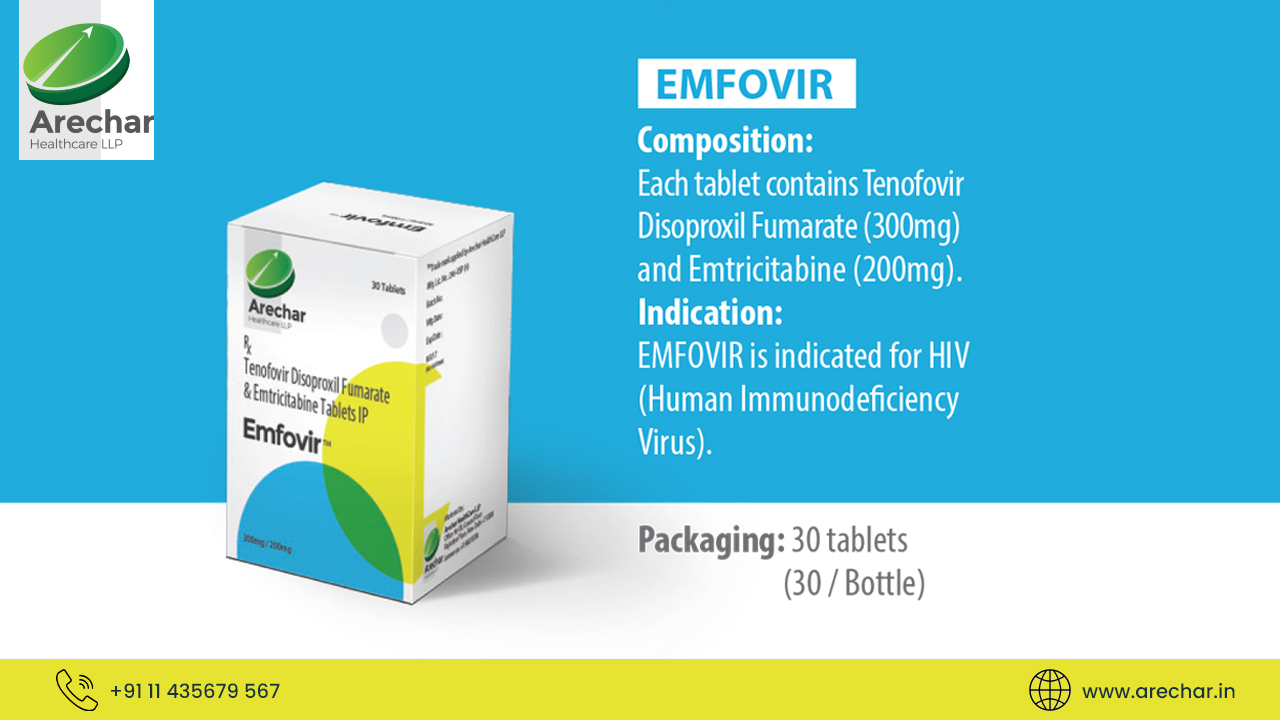 All about Emfovir (Tenofovir Disoproxil Fumarate and Emtricitabine) tablet

Description: Emfovir comprises two efficient antiretrovirals. It is a prescription drug used in the treatment of HIV infection.

Emfovir is a combination of two antiretrovirals namely Tenofovir Disoproxil Fumarate & Emtricitabine. It is an anti-HIV formulation that inhibits the growth and spread of the virus in the body. This helps the immunity to prevent further damage. This medicine works by targeting specific nonstructural proteins of the virus that further results in disruption of viral multiplication or replication in the body.

Its clinical relevance refers to the disease for which it is prescribed. Emfovir is an anti-HIV drug available in the strength of 300mg+200mg in the form of tablets indicated for oral administration in patients suffering from HIV (Human Immunodeficiency Virus) infection. This medication helps to manage HIV and AIDS along with related symptoms. However, it is not a permanent cure for HIV infection.

Emtricitabine is a compound that competes with the natural substrate of HIV-1 reverse transcriptase to be incorporated into new DNA as it is a cytidine analog, terminating its transcription. It is given once a day, therefore, has a comparatively long duration of action. Patients should be made aware of the risk of lactic acidosis and hepatomegaly with steatosis.

The fumarate salt of the prodrug Tenofovir Disoproxil is known as Tenofovir Disoproxil Fumarate. It is absorbed and converted to its active form, Tenofovir which is a nucleoside monophosphate analog. The compound is later converted to the active metabolite, tenofovir diphosphate which is a chain terminator, by constitutively expressed enzymes in the cell. Tenofovir diphosphate works to inhibit HIV-1 reverse transcriptase and the Hepatitis B polymerase by direct binding competition with the natural deoxyribonucleotide substrate and, after integration into DNA, tends to cause viral DNA chain termination.

Emtricitabine is a cytidine analog that competes with deoxycytidine 5'-triphosphate for HIV-1 reverse transcriptase when phosphorylated to emtricitabine 5'-triphosphate. Inhibition of reverse transcriptase prevents transcription of viral RNA into DNA, hence the virus is unable to incorporate its DNA into host DNA and replicate using host cell machinery. This leads to a decreased viral load.

Tenofovir Disoproxil Fumarate and Emtricitabine are approved for combined use in the prevention of HIV. Drug concentrations after receipt of oral administration of tablet for HIV Pre Exposure Prophylaxis (or PrEP) appeared to be lower in transgender women compared to Men who Have Sex with Men (MSM) in the iPrEx study, the landmark study of PrEP for HIV prevention. There were low concentrations among transgender women (TGW) reporting the use of feminizing hormones. There are different reasons for the lower drug concentrations including behavioral or biomedical, or both in combination. While there are no systemic medicine interactions between TDF and oral contraception, there are some observed interactions including these groups of medications with drug transporters that have the ability to affect drug concentrations in target tissues. Medicine interactions with natural estrogen agents and anti-androgenic drugs used for gender-affirming hormone therapy among transgender women have not been tested, neither have interactions between emtricitabine and female hormones. Concerns about the impact of PrEP on gender-affirming hormone therapy are the main barrier to the uptake of PrEP among transgender women. Besides, very little is studied and investigated about TDF/FTC pharmacokinetics in transgender men using testosterone hormonal therapy. Medicine interactions with masculinizing hormones have not been properly studied as transgender men have not been involved in PrEP clinical studies or other demonstration projects. This clinical study will evaluate pharmacokinetic medicine interactions between tenofovir disoproxil fumarate with emtricitabine and cross-sex hormone therapy.

For HIV-1 infection treatment in patients weighing 17kg or more: The recommended dose for the treatment of HIV-1 infection in patients weighing 17kg or more is one low strength tablet of Emfovir based on the bodyweight of the patient (167 mg/250 mg, 133 mg/200 mg, or 100 mg/150 mg). Emfovir tablet should be taken with or without food orally once daily.

For pre-exposure Prophylaxis: The recommended dose for uninfected individuals is one tablet of Emfovir (containing Tenofovir Disoproxil Fumarate 300mg and Emtricitabine 200mg). Emfovir tablet should be taken with or without food orally once daily.

In case of overdose, the patient should be initially monitored for evidence of toxicity. Hemodialysis treatment may be used to remove excessive Emtricitabine and Tenofovir Disoproxil Fumarate from the body through minor surgery to the arm. The patient should be given proper supportive care with monitoring for a certain period of time (till adverse effects minimize).

Emfovir tablets may lead to certain unfavorable reactions during the course of medication. It is important to be aware of the side effects and learn the ways to manage them either through supportive care or over-the-counter medicines. The following are the most common side effects of Emfovir tablets.

Gastrointestinal disorders may occur such as diarrhea, nausea, vomiting, dyspepsia (indigestion), gastritis (inflammation of the lining of the stomach), and abdominal pain. These effects may occur after the administration of Emfovir tablets or anytime during the course of this medication.

General disorders and allergic reactions including fatigue (lack of energy), bruising, skin rash, itching, swelling (inflammation), burning, and irritation. These effects may be accompanied by infection-like symptoms such as fever, chills, cough, cold, vomiting, and back pain.

Nervous System effects including dysgeusia (impaired sense of taste), syncope, convulsion, amnesia, transient ischemic attack, and tremor. Know more about such reactions on your nervous system from a qualified doctor before the administration of Emfovir tablets.

Emfovir is available as tablets in the strength of Tenofovir Disoproxil Fumarate 300mg and Emtricitabine 200mg. 30 tablets are packaged in bottles with induction sealed child-resistant closures. Store at room temperature 25° C, excursions permitted to 15° C to 30° C. make sure to keep the container tightly closed. Keep Emfovir tablets away from the reach of children and pets. Protect from excessively direct light, heat, and moisture. Pregnant women should not handle Emfovir tablets without gloves (or any other protection)