Medicine > All about Fulvant (Fulvestrant) injection 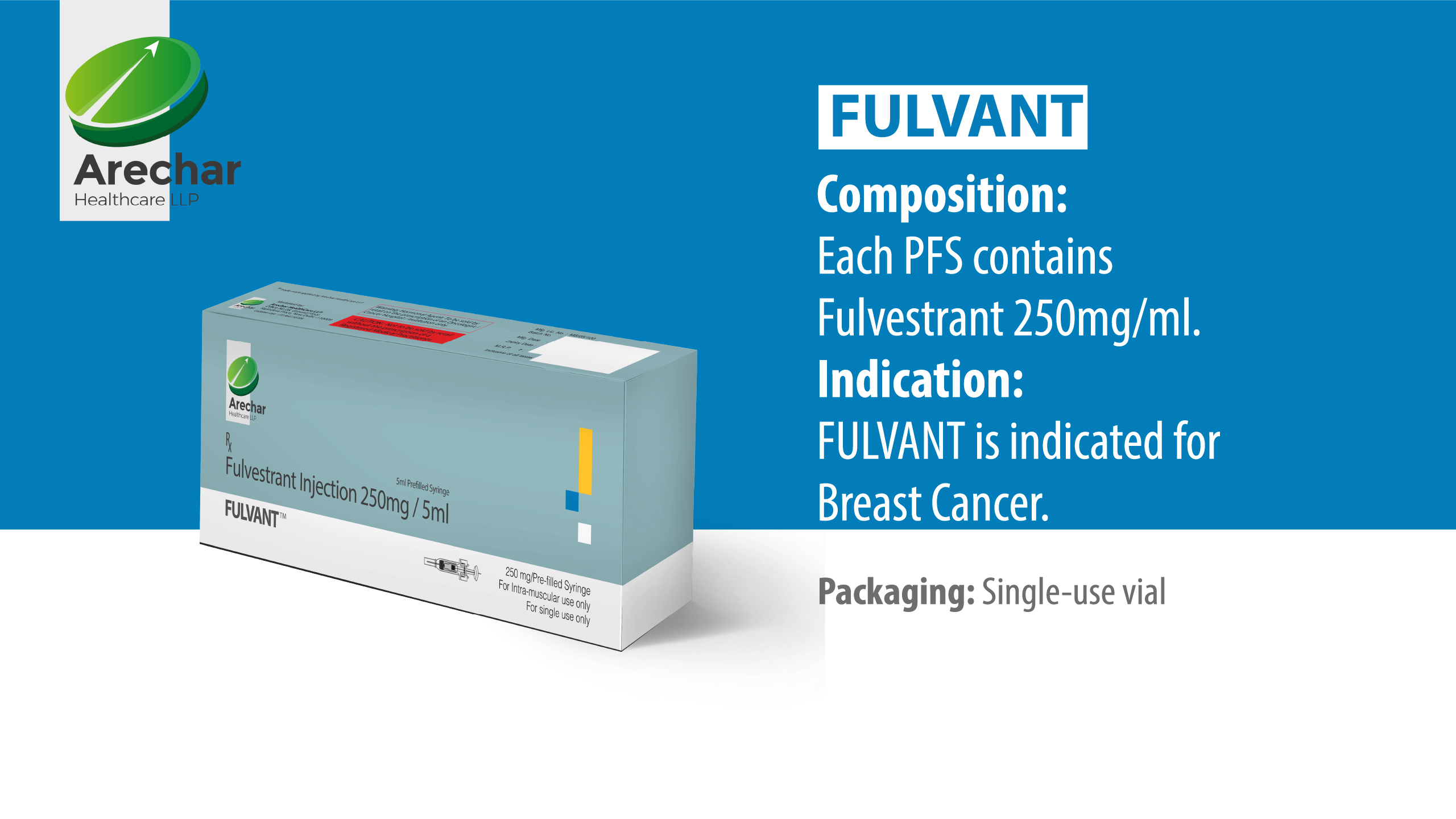 All about Fulvant (Fulvestrant) injection

Description:- Fulvant is a prescription medicine, comprising Fulvestrant. It is an estrogen receptor antagonist used as a drug treatment for Metastatic Breast Cancer in postmenopausal females.

Fulvant is a formulation of an estrogen receptor antagonist, Fulvestrant. It is prescribed to treat post-menopausal females suffering from hormone receptor (HR)-positive Metastatic Breast Cancer with evidence of disease progression following anti-estrogen therapy. It is used both as a monotherapy and a combination therapy for the effective treatment of Breast Cancer.

Fulvant injection is an anti-cancer medication. Its salt composition is Fulvestrant which is an Antineoplastic Agent. This compound is used as hormone therapy. It tends to block estrogen receptors in the body. It is indicated for use in postmenstrual women who have Breast Cancer. Before using this injection, make sure to read its relevance and usage including the following therapies.

Monotherapy:- Fulvant injection is indicated to postmenopausal women for the treatment of hormone receptor (HR)-positive, human epidermal growth factor receptor 2 (HER2)-negative Advanced Breast Cancer, provided that it is not previously treated with endocrine therapy. It is also used as a monotherapy in postmenopausal women to treat HR-positive advanced Breast Cancer with disease progression after endocrine therapy.

Combination Therapy:- Fulvant injection is used in postmenstrual women as a combination therapy with Ribociclib as initial endocrine-based therapy or following disease progression on endocrine therapy for the treatment of HR-positive, HER2-negative Metastatic Breast Cancer. It is also used in combination with Abemaciclib in women suffering from HR-positive, HER2-negative Metastatic Breast Cancer with disease progression after endocrine therapy.

Fulvestrant (‘Fulvant’) is an estrogen receptor (ER) antagonist with no agonist effects and a novel pharmacological profile. It downregulates cellular levels of ER and PgR (progesterone receptor). Fulvestrant also tends to compete with estrogen for binding to the ER. To achieve effective inhibition of estrogen-controlled proliferation, downregulation of the ER needs to be sustained over time. Therefore, in comparison to some other antitumor agents (such as cytotoxic chemotherapies, which are administered in cyclic regimens) sustained exposure to fulvestrant via chronic administration is required for activity.

Fulvestrant (Fulvant) works by competitively and reversibly binding to estrogen receptors that are present in cancerous cells in the body. The compound tends to achieve its anti-estrogen effects through two different mechanisms. First is that Fulvestrant works by binding to the receptors. It downregulates them in order that estrogen is not any longer ready to bind to those receptors. The second is that Fulvestrant tends to degrade the estrogen receptors to which it's bound. Both of those mechanisms inhibit the expansion of tamoxifen-resistant also as estrogen-sensitive human carcinoma cell lines.

At a steady-state, the observable volume of distribution is about 5L/kg which makes it clear that the distribution is extravascular. This compound is 99% bound to plasma proteins.

Metabolism of Fulvant involves amalgamations of certain biotransformation pathways analogous to those of endogenous steroids, that includes oxidation, aromatic hydroxylation, conjugation with glucuronic acid, and/or sulphate at the 2, 3, and 17 positions of the steroid nucleus, and oxidation of the side chain sulphoxide. Identified metabolites either are less active or tend to exhibit similar activity to Fulvant in antiestrogen models. Through the studies using human liver preparations and recombinant human enzymes, it was made clear that cytochrome P-450 3A4 (CYP 3A4) is the only P-450 isoenzyme that is involved in the oxidation process of Fulvestrant. However, in vivo, the relative contribution of P-450 and non-P-450 routes are not known.

It was reported that Fulvant was rapidly cleared through the feces by the hepatobiliary route with excretion primarily (about 90%). Renal elimination was almost negligible (less than 1%).

For use in postmenopausal females suffering from advanced hormone‐sensitive Breast Cancer, Fulvestrant is as effective and safe for administration as the comparator endocrine therapies in the included studies. However, this compound may be potentially more effective when given at a strength of 500 mg than current therapies, though this high dose was administered to individuals in only one of the nine studies. The researchers did not see any advantage with combination therapy. It was reported that Fulvestrant was equally as effective as control therapies in both first-line and second‐line treatments both. This demonstrates that Fulvestrant is one of the safe and effective systemic therapies. Also, it can be considered as a rational option in the series of treatment methods used to treat postmenopausal women with hormone‐sensitive Advanced Breast Cancer.

Anti-Estrogens:- These are the substances that are responsible for the prevention of estrogen’s full expression. Anti-Estrogens work to exert antagonistic effects on the tissues (targeted). They tend to block the estrogen receptor and inhibit the production of estrogen.

Steroids:- These are the man-made version of chemicals. Steroids work to reduce inflammation and decrease the immune system’s activity. When inflammation in the body severely affects the organs, steroids help and prove to be life-saving agents.

Antineoplastic Agents:- These are the chemotherapeutic agents used in the treatment of certain types of cancers. Such drugs are available in many different forms. Antineoplastic agents work to target and kill the cancerous cells in the body.

Fulvant is available as a 5mL Prefilled USP Type 1 Glass Syringe. It contains Fulvestrant in a strength of 250mg packed in a mono carton along with a package insert and a needle. It should be stored at 2ºC to 8ºC. The injection should not be frozen. Keep such medicines away from children and pets. Protect from direct light, moisture, and heat. Know the ways to dispose of the unused and expired medicines beforehand from your pharmacist.

Recommended Dose:- Fulvant is available as an injection of strength 250mg. The injection is administered into the buttock muscle by a nurse or healthcare professional. The recommended dose of Fulvant is 500mg given intramuscularly into the buttocks slowly (approximately 1-2 minutes per injection). The frequency of injection usually depends upon the medical condition of the patient. However, its recommended frequency includes administration on days 1, 15, 29, and once in a month thereafter.

Overdosage:- An overdose can lead to severe adverse reactions, including death. If symptoms of overdose occur, it is important to contact a healthcare professional immediately or seek emergency help from the nearest hospital or a medical center.

Dose Adjustments:- Dose adjustment may be needed in the case of patients who are suffering from Hepatic Impairment. A dose of 250mg is administered intramuscularly into the buttocks slowly (approximately 1-2 minutes per injection) on days 1, 15, 29, and once in a month thereafter.

Fulvant injection may cause some gastrointestinal effects after its administration such as nausea, vomiting, constipation, diarrhea, abdominal pain, and weakness. These effects may or may not last longer than a usual period of time.

This medicine may lead to severe reactions on the central nervous system that may show some symptoms like dizziness and headache. These effects are accompanied by severe drowsiness leading to high fever and weakness.

Certain endocrine disorders may occur in some patients. Most commonly seen effects include hot flashes, nausea, fatigue, frequent urination, and weight changes. You can ask your doctor about certain home remedies to manage endocrine effects such as diet changes, vitamins, and other nutritional add-ons.

Neuromuscular and skeletal effects such as back pain, numbness or tingling, difficulty in swallowing, balance problems, and double vision may occur and worsen your medical condition.

After administering Fulvant injection, certain injection-site reactions may occur. This includes rash on the skin, itching, pain, swelling, and bumps. These effects may not occur for a longer time. One can easily treat or manage such allergic reactions by cold packs, over-the-counter medications, and other prescription medicines for infection.

A number of patients experience flu-like symptoms such as fever or feeling feverish, chills, difficulty in breathing, fatigue, runny nose, sore throat, muscle pain, headache, body ache, and stomach ache. A healthcare professional should be approached as soon as possible if such side effects worsen your health.

Pediatrics:- It is not known whether Fulvant injection is safe for use in children.

Geriatrics:- No notable differences in the pharmacokinetics of the drug in older people were observed.

Pregnant Women:- Fulvant may lead to fetal harm when given to a woman during pregnancy. In animals, Fulvestrant caused adverse reactions or abnormalities when administered during the period of organogenesis at doses significantly smaller than the maximum recommended human dose based on the body surface area (BSA). Women of childbearing potential should be advised not to become pregnant while receiving Fulvant. If Fulvant is used during pregnancy, or if the patient becomes pregnant while receiving this drug, the patient should be apprised of the potential hazard to the fetus.

Hepatic Impairment:- Dose adjustment may be needed in the case of patients who are suffering from Hepatic Impairment. A dose of 250mg is administered intramuscularly into the buttocks slowly (approximately 1-2 minutes per injection) on days 1, 15, 29, and once in a month thereafter.

Safety of the drug:- The efficacy of this medicine is not yet established in the case of patients suffering from biliary tract disease, jaundice, and hyperbilirubinemia.

Blood Disorder:- Fulvant injection should be used with utmost caution in patients who are suffering from coagulopathy and thrombocytopenia. Also, the patients who use anticoagulant drugs are at risk of bleeding or bruising during the administration of Fulvant.