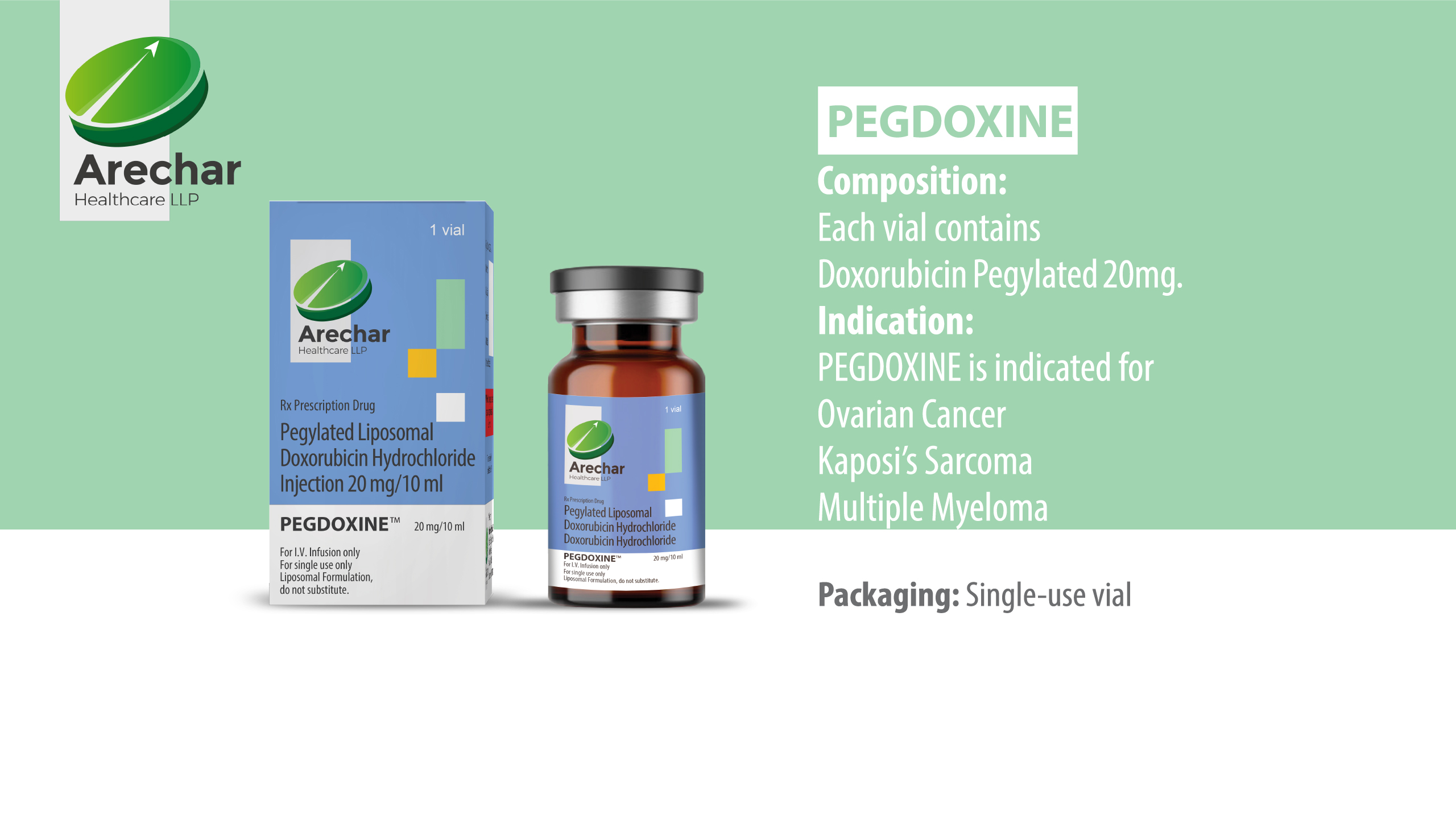 Description:- Pegdoxine Injection (20 mg/10 ml) is a cancer-fighting drug that belongs to the group of medicines known as Antineoplastic Agents. It is responsible for slowing or stopping the growth of cancerous cells in the body.

Pegdoxine injection is an anticancer drug used to treat various types of cancers including Ovarian Cancer, AIDs related to Kaposi’s Sarcoma, Breast Cancer, and Blood Cancer. It comprises Doxorubicin Hydrochloride Pegylated. It belongs to the class of medicines referred to as Antineoplastic drugs, which are also known as cancer-fighting agents.

The clinical relevance of the drug tells about its importance and indications. Before administering the injection, it is necessary to know its relevance, safety, and efficacy. Pegdoxine injection is often prescribed for the treatment of the following diseases.

Doxorubicin Hydrochloride (Pegdoxine) is an antineoplastic agent in the anthracycline class of drugs. General specifications of medicines in this group include interaction with DNA in different ways such as intercalation (squeezing between the base pairs), DNA strand breakage, and inhibition with the enzyme topoisomerase II. Most of such formulations have been isolated from natural sources and antibiotics. However, they somehow lack the specificity of antimicrobial antibiotics. This is why they produce significant toxicity. The anthracycline agents are among the vital antitumor medicines available. Doxorubicin is broadly used to treat certain solid tumors whereas Daunorubicin and Idarubicin are used to treat a type of Blood Cancer namely leukemia. Doxorubicin may also tend to inhibit polymerase activity. It may affect the regulation of gene expression, and work by producing free radical damage to DNA. the compound also possesses an antitumor effect against a broad spectrum of tumors (grafted or spontaneous). The anthracycline drugs are cell cycle-nonspecific.

The medication is metabolized in the liver. It is distributed primarily to vascular fluid in intravascular space. Significant levels of doxorubicinol (principal metabolite) do not occur, most probably due to the slow distribution of free doxorubicin to the liver. Halflife is about 55 hours. The compound is excreted primarily in bile.

Doxorubicin along with Doxorubicinol is approximately 74-76% bound to plasma protein. The extent of binding does not depend on plasma concentration. Also, the drug does not cross the blood-brain barrier.

Doxorubicin is competent to undergo three metabolic routes. However, about half of the dose is excreted from the body unchanged. Two electron reduction yields secondary alcohol, doxorubicinol. This pathway is thought to be the primary metabolic pathway. The one-electron reduction is eased by various oxidoreductases in order to form a doxorubicin-semiquinone radical. Such enzymes include mitochondrial and cystolic NADPH dehydrogenates xanthine oxidase and nitric oxide synthases. Deglycosidation is a minor metabolic pathway that is undergone by only 1-2% of the dose. Enzymes that might be involved with such a pathway include NADPH-cytochrome P450 reductase, xanthine oxidase, and cytosolic NADPH dehydrogenase.

The clinical relevance and safety of Doxorubicin HCl-containing regimens for the post-operative, adjuvant treatment of Breast Cancer was calculated in a meta-analysis initiated by a Group namely “Early Breast Cancer Trialists Collaborative Group” (EBCTCG). Data from the meta-analysis of trials comparing CMF to no therapy were used to illustrate the historical treatment effect size for CMF regimens. The major safety outcome factors were disease-free survival and overall survival. Out of 3510 women (2157 received doxorubicin HCl-containing regimens and 1353 received CMF treatment) with early breast cancer involving axillary lymph nodes involved in the six trials from the meta-analyses, on average 70% were premenopausal and 30% were postmenopausal. At the moment when the meta-analysis was done, 1745 first recurrences and 1348 deaths had occurred. The analyses showed that the compound retained approximately 75% of the historical CMF adjuvant effect on DFS with a hazard ratio (HR) of 0.91 and on OS with an HR of 0.91.

Recommended Dose:- Pegdoxine (Doxorubicin Hydrochloride Pegylated Liposomal) injection should be administered intravenously. Its recommended dose may vary from person to person and disease to disease. The frequency of administration includes a 21-day treatment cycle either in combination with some other drug like Cyclophosphamide or as a monotherapy.

Dose Modification:- In case of Hepatic impairment or/and Cardiac impairment, dose adjustments may be needed as per the medical condition of the patient. If a patient experiences symptoms of cardiomyopathy, Pegdoxine injection should be discontinued.

Overdosage:- If symptoms of overdose such as mucositis, leucopenia, or/and thrombocytopenia occur, it is important to call the nearest emergency medical center or your healthcare provider. Know about the symptoms beforehand from your doctor and do not avoid any of them. Seek immediate support from a qualified healthcare professional.

After the administration of Pegdoxine injection, an individual might face certain adverse effects. These are due to the body’s response to the drug. In most cases, side effects go on their own after a certain period of time. However, if side effects last longer than a certain period of time, it becomes important to consult a healthcare professional in order to discuss the ways to manage them.

Injection site reactions are very common after the administration of an injection. This includes reactions such as dry skin, skin rash, skin discoloration, alopecia (loss of hair), skin disorder, erythematous streaking along vein proximal to the injection site, and

Some patients may experience severe effects on the central nervous system including headache, anxiety, asthenia, paresthesia, malaise, dizziness, somnolence, and emotional lability. These reactions may be accompanied by fever and chills.

Certain cardiovascular reactions may occur after administering the injection. Some of the possible effects are chest pain, cardiotoxicity, peripheral edema, hypotension, and tachycardia. These effects are more common in patients who are already suffering from heart disease.

A genitourinary disorder like albuminuria which is a sign of kidney disease may occur in some patients after the administration of the Pegdoxine injection. This includes reactions like shortness of breath, more frequent urination, loss of appetite, muscle cramping at night, and swelling in the face or legs.

A number of hematologic reactions may be experienced by a patient including bone marrow depression, increased prothrombin time, and hemolysis (rupture of red blood cells). Respiratory diseases such as dyspnea (shortness of breath), increased cough, and pneumonia may occur for a few or more days.

Hepatic and metabolic disturbances like hyperbilirubinemia (discoloration of eyes and skin), hypocalcemia (low level of calcium in the blood), dehydration, and hyperglycemia (high levels of blood sugar) might be experienced by the patient.

Pegdoxine injection is packed in a 10 ml single-use vial in the strength of 2mg/ml. Handle the vial with utmost care as it is a cytotoxic agent. Store Pegdoxine injection between 2°to 8°C. Do not freeze it. Keep it away from the reach of pets and children. Protect the injection from direct heat, light, and moisture. Do not use an expired solution. Check the labels for the same carefully. Also, make sure to know the ways to dispose of the used vials or expired solutions from your pharmacist.