Medicine > All about Perfecine (Pirfenidone) tablet 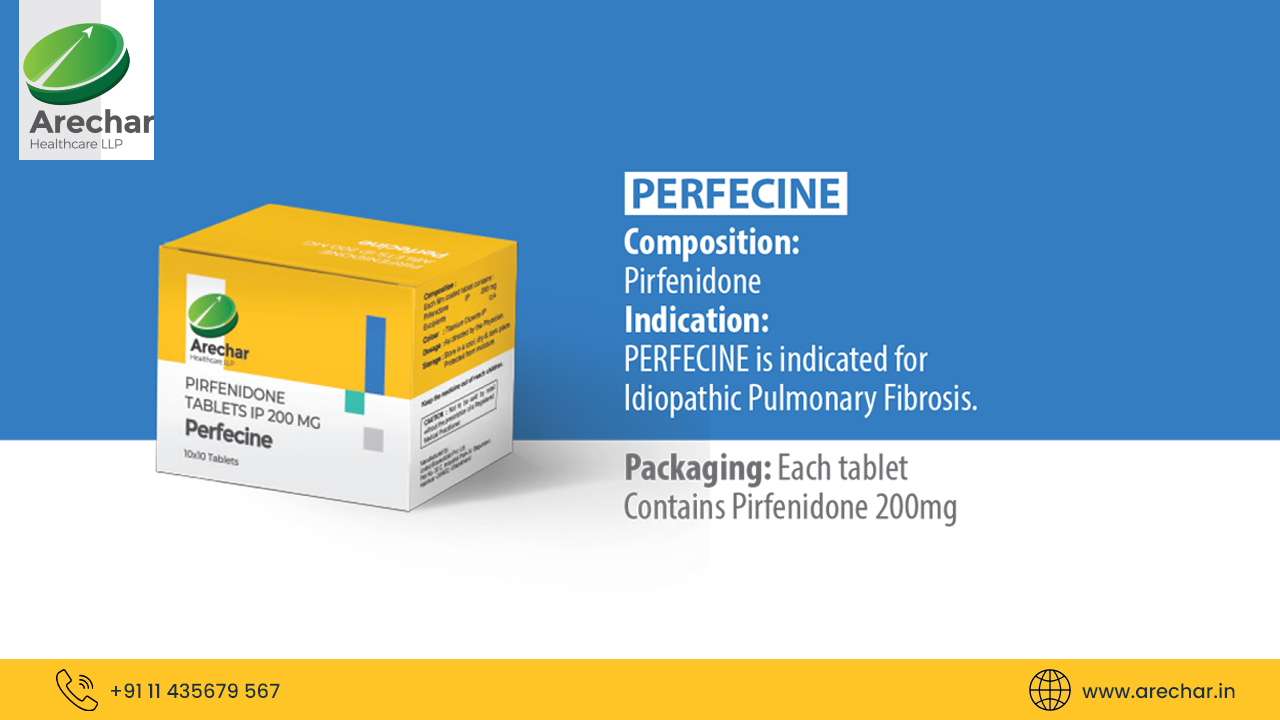 All about Perfecine (Pirfenidone) tablet

Description: Perfecine is a pirfenidone formulation proven to be an effective clinical solution for the treatment of Idiopathic Pulmonary Fibrosis.

Perfecine (Pirfenidone) is an established drug indicated for use in patients suffering from Idiopathic Pulmonary Fibrosis, a rare and progressive disease of the respiratory system that is highly associated and related to the formation of scar tissue. This scar tissue is thought to thicken over a period of hindering lung function. It is important to know that Perfecine (Pirfenidone) is not the cure for IPF, however, it is efficacious enough to slow the progress of the disease and increase the survival period of the patients.

Although the accurate mechanism of action of pirfenidone and its related molecular targets have yet to be investigated, the regimen has shown anti-fibrotic, anti-inflammatory, and antioxidant effects. One vital anti-fibrotic procedure includes suppression of TGF-β1 (transforming growth factor-β1), a key cytokine involved in fibrogenesis and extracellular matrix production. There is also evidence to prove that this compound possesses the ability to downregulate the expression of potent pro-inflammatory cytokines like TNF-α, interleukin-1, and interferon-gamma. In animal models, it can successfully inhibit both the influx of inflammatory cells and the increased pulmonary vascular permeability that is induced by bleomycin.

Pirfenidone is one of the novel agents possessing anti-inflammatory, antioxidant, and antifibrotic properties. It may tend to improve lung function and decrease the total number of acute exacerbations in patients suffering from idiopathic pulmonary fibrosis (IPF).

In two of three phases 3 trials, Perfecine (Pirfenidone), an oral antifibrotic therapy, tend to reduce disease progression, as investigated by the decline in forced vital capacity (FVC) or vital capacity, in patients suffering from idiopathic pulmonary fibrosis. The ultimate analysis of all-cause mortality demonstrated a decrease in the number of deaths in the pirfenidone group as compared to the placebo group, although the difference was not vital. Eleven patients (4.0%) in this group died during the study, as compared with 20 patients (7.2%) in the placebo group (hazard ratio, 0.55; 95% CI, 0.26 to 1.15; P=0.10). Deaths from idiopathic pulmonary fibrosis occurred in 3 subjects (1.1%) and 7 patients (2.5%) in the pirfenidone and placebo groups, respectively (hazard ratio, 0.44; 95% CI, 0.11 to 1.72; P=0.23). In the prespecified analysis of all-cause mortality in the pooled population of 1247 patients (555 from the ASCEND study and 692 from the CAPACITY studies), the regimen showed a reduction in the risk of death at 1 year by 48%, as compared with placebo. In addition, in the pooled population, the risk of death from idiopathic pulmonary fibrosis at 1 year was also decreased by 68% in the pirfenidone group, as compared with the placebo group (hazard ratio, 0.32; 95% CI, 0.14 to 0.76; P=0.006).

Before initiating the treatment with Perfecine (Pirfenidone), liver function tests should be done and investigated by the healthcare team. The recommended daily maintenance dosage of Perfecine is 800 mg three times a day. Further, dose increase or decrease shall be done as per the medical condition and requirements of the patient.

There is very limited data available showing the cases of overdosage and related adverse events. However, in the event of a suspected overdose, the patient should be hospitalized and be monitored for vital signs and symptoms. The clinical status of the patient should be observed till necessary.

Allergic reactions or photosensitivity effects may be also experienced by some patients such as skin rash, itching, swelling on the face, tongue, legs, or throat, redness on the skin, photosensitivity, and blurred vision.

Some patients may also experience certain effects of the Central Nervous System namely severe headache, dizziness, and drowsiness. In most cases, these reactions are accompanied by fever and chills.

Administration of Perfecine can lead to an increase in liver enzymes in the patients. As per the clinical trials, no cases of a liver transplant due to liver failure were reported. However, it is important to conduct liver function tests prior to the first dose of Perfecine, then once a month during the therapy to avoid any complications.

Administration of Perfecine can lead to an increased risk of photosensitivity reactions or skin rash. As per the clinical trials, administration of Perfecine showed a greater incidence of such adverse events in patients. Such reactions can occur majorly in the first 6 months of the therapy. It is important to instruct the patients to minimize exposure to sunlight. Also, instruct the patients to avoid using drugs that are known to cause the same reaction.

Administration of Perfecine can lead to gastrointestinal disorders including nausea, vomiting, gastroesophageal reflux disease, and stomach pain more frequently in the patients. As per the clinical trials, the incidence of such adverse effects was highest and it also showed a decrease over time. However, dose modifications may be necessary in some severe cases.

Administration of Perfecine in pregnant women might lead to birth defects and miscarriage. However, there is very insufficient data available to showcase the drug-related adverse effects on women who are pregnant. To take necessary precautions, you may be recommended to not initiate the use of Perfecine during pregnancy.

Administration of Perfecine should be done with extreme caution in patients suffering from mild to moderate (Child-Pugh Class A-B) hepatic impairment. It is important to monitor such patients for adverse reactions. Perfecine is not indicated for use in patients suffering from severe hepatic impairment since the safety, efficacy, and pharmacokinetics have not yet been studied in such patients.

Administration of Perfecine should be done with extreme caution in patients suffering from mild, moderate, or severe renal impairment. It is important to monitor such patients for adverse reactions. Perfecine is not indicated for use in patients suffering from an end-stage renal disease that requires dialysis since the safety, efficacy, and pharmacokinetics have not yet been studied in such patients.

Smoking can lead to a decrease in exposure to Perfecine. This can alter the efficacy of the drug. It is important to instruct the patients to stop smoking prior to and during the therapy.

Perfecine tablets contain 200mg Pirfenidone. The tablets are indicated for oral administration only in a fixed strength as per the doctor’s prescription. Store Perfecine tablets at 59°F to 86°F (15°C to 30°C). Keep this regimen away from the reach of especially pets and children. Do not place the medication under direct exposure to light or heat. Protect Perfecine tablets from moisture. Learn the ways to dispose of the used and expired packs of Perfecine from your nearest pharmacist. Especially women who are pregnant should avoid handling Perfecine tablets without protection (gloves).