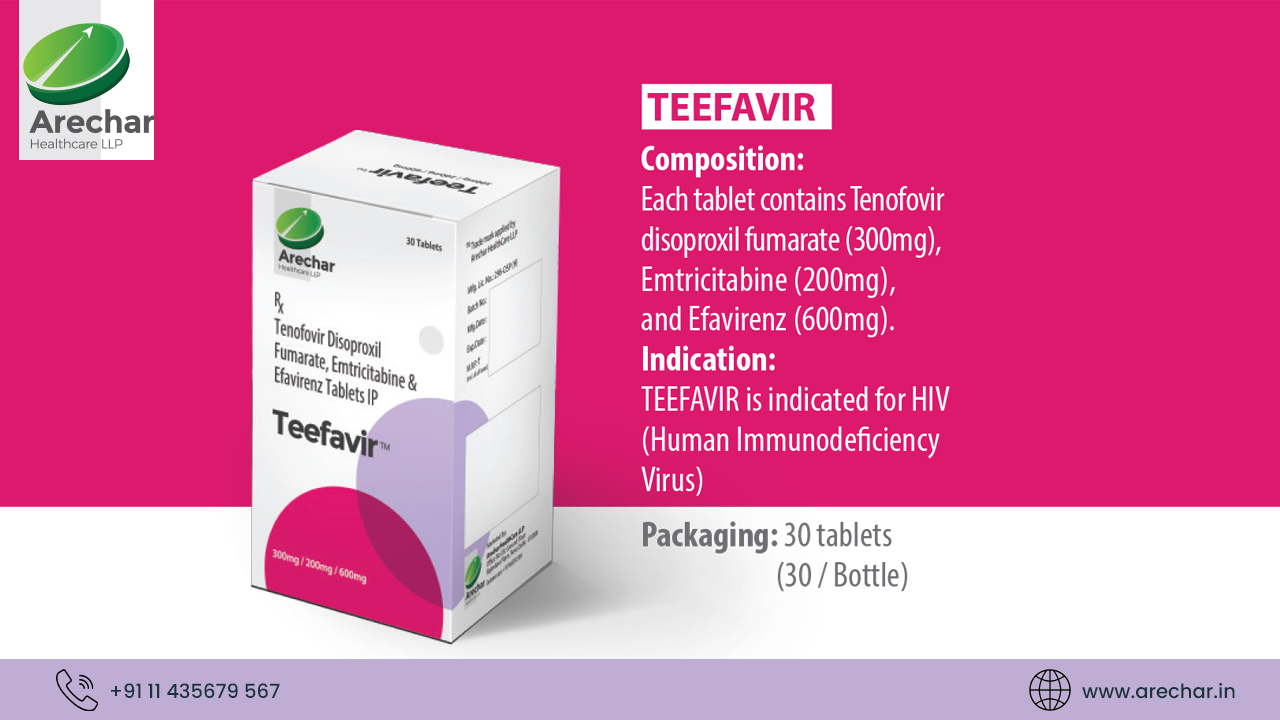 All about Teefavir (Tenofovir disoproxil fumarate, Emtricitabine and Efavirenz) tablet

Teefavir (Tenofovir disoproxil fumarate, Emtricitabine, and Efavirenz) is an anti-HIV medication. It is a prescription drug that works by stopping or slowing the multiplication of the human immunodeficiency virus in the human body. It is a combination therapy consisting of three anti-infective agents.

Efavirenz: Patients suffering from HIVnfection had peak plasma concentrations of about 3-5 hours and steady-state plasma concentrations were then reached in 6-10 days. In approximately 35 HIV-1 infected patients receiving this compound once a day, steady-state Cmax was 12.9  3.7 M, Cmin was 5.6  3.2 μM, and AUC was 184  73 M·hr. Efavirenz is highly bound to human plasma proteins, predominantly to albumin. After the administration of 14C-labeled efavirenz, a percentage of the dose, approximately 14-34%, was recovered in the urine (as metabolites) and 16–61% was recovered in feces (as parent drug). In clinical studies, it was clear that CYP3A and CYP2B6 are the major isozymes that metabolize efavirenz. Efavirenz has been shown to influence CYP enzymes, which led to the induction of its metabolism. This compound has a terminal half-life of 52-76 hours after e administration of single doses and 40-55 hours after a number of doses.

Emtricitabine: After the oral administration, emtricitabine is absorbed rapidly, with peak plasma concentrations occurring at 1–2 hours afterward. After multiple-dose oral administration of emtricitabine to 20 subjects suffering from HIV-1 infection, the steady-state plasma emtricitabine Cmax was 1.8 0.7 g/mL and the AUC was 10.0  3.1 g•hr/mL. The average steady-state plasma trough concentration at 24 hours afterward was 0.09 g/mL. The approximate bioavailability of emtricitabine was 93%. Less than 4% of emtricitabine tends to bind to human plasma proteins in clinical study and the binding isn’t dependent on concentration over the range of 0.02200 g/mL. After the administration of radiolabelled emtricitabine, nearly 86% is recovered in the urine and around 13% of the total is recovered as metabolites. The metabolites of this compound include 3′-sulfoxide diastereomers and their glucuronic acid conjugate. The compound is eliminated by a combination of glomerular filtration and active tubular secretion with a renal clearance in adults with a normal renal function of 213  89 mL/min (mean  SD). After a single oral dose, the plasma emtricitabine half-life is about 10 hours.

Tenofovir Disoproxil Fumarate: After the oral administration of a single 300 mg dose of tenofovir disoproxil fumarate to patients suffering from HIV-1 infection with an empty stomach, maximum serum concentrations were achieved in about1.0  0.4 hrs and the values of Cmax and AUC were 296.90ng/mL and 2287.685 ng•hr/mL, respectively. The oral bioavailability of tenofovir from tenofovir DF in subjects with an empty stomach is nearly 25%. Lower than 0.7% of the compound tends to bind to human plasma proteins in clinical study and the binding is not dependent on concentration over the range of 0.01–25 μg/mL. About 70-80% of the dose of tenofovir is recovered as an unchanged medicine in the urine. Tenofovir is thought to be eliminated by a combination of glomerular filtration and active tubular secretion with a renal clearance in adult patients having a normal renal function of 243 33mL/min. After the administration of a single oral dose, the terminal elimination half-life of the compound is about 17 hours.

In clinical studies, Efavirenz has been shown to influence CYP3A and CYP2B6. When efavirenz is given to the patients it may decrease the plasma concentrations and other compounds that are substrates of CYP3A or CYP2B6. Drugs that influence CYP3A activity (e.g., phenobarbital, rifampin, rifabutin) would be expected to increase the clearance of efavirenz, resulting in lowered plasma concentrations.

Adults and pediatric patients (12 years of age and older) with body weight at least 40 kg (at least 88 lbs): The dose of Teefavir is one tablet once a day administered orally without food. Administration of dose at bedtime can improve the tolerability of the symptoms associated with the nervous system.

Renal Impairment: Since Teefavir is a fixed-dose medication, it should never be prescribed to patients requiring dosage adjustment such as patients suffering from moderate or severe renal impairment with estimated creatinine clearance lower than 50 mL/min.

Rifampin Coadministration: When Teefavir tablet is administered with rifampin to patients weighing 50 kg and above, an additional dose of 200 mg/day of efavirenz is prescribed.

Adverse events have been observed during clinical trials and most of them are dependent upon the medical history of the individuals and the reaction of the human body to the medications consumed. Some side effects of Teefavir tablets were severe, moderate, and mild during treatment with this medication.

Other side effects like neurological and psychological effects may be experienced by some patients receiving Teefavir tablets such as depression, changes in mood, increased thirst/urination, tremors (shaking), irregular heartbeat, unexpected tiredness, and lack of energy.

Treatment with Tenofovir Disoproxil Fumarate/Emtricitabine/Efavirenz Tablet has not been shown to eradicate the risk of transmission of HIV infection by sexual contact or by blood transfer, though the risk may be reduced. Patients should continue to use accurate precautions to hinder the transmission of the Human immunodeficiency virus.

Increased transaminase levels may arise months after starting efavirenz and may be more persistent in patients with HBV- and/or HCV co-infection. Discontinuation of treatment is recommended if symptoms like hepatotoxicity occur, or if the transaminase levels are > 10 times the upper limit of normal. Liver dysfunction has occurred in patients with no preexisting hepatic disease or other known risk factors. Close monitoring of liver enzymes should be considered for patients without pre-existing hepatic failure or other risk factors.

These symptoms are very common and typically occur within the first week of treatment and usually conclude within 4 weeks of treatment. Additional effects with alcohol and other psychoactive drugs may occur in some patients. If patients experience symptoms such as severe depression, psychosis, or suicidal ideation they should immediately contact their health care provider to determine whether the benefits outweigh the risks of continued therapy.

HIV patients with pre-existing severe immune deficiency, typically in the first few weeks or months after initiation of combination ART, an inflammatory reaction to asymptomatic or residual opportunistic pathogens (e.g. CMV retinitis, mycobacterial infections, Pneumocystis pneumonia) may occur and cause serious clinical conditions or aggravation of symptoms. Treatment should be instituted when required.

Teefavir tablet may lead to fetal harm when given to a pregnant woman. This tablet is not indicated to patients who are pregnant or are planning to become pregnant. Females having child-bearing potential are recommended to use contraceptive measures 28 days before the course of Teefavir.

It is not yet known if Teefavir (Tenofovir Disoproxil Fumarate/Emtricitabine/Efavirenz) is eliminated or excreted in human milk or not. As many other medications are excreted in human milk, it is vital to take precautionary steps and avoid adverse reactions. Hence, breastfeeding should be discontinued while receiving treatment with Teefavir tablets.

Pediatric and Geriatric Use

The safety and efficacy of Teefavir (Tenofovir Disoproxil Fumarate/Emtricitabine/Efavirenz) have not been established in patients below 18 years of age.  In patients, aged 65 or above, Tefavir (Tenofovir Disoproxil Fumarate/Emtricitabine/Efavirenz) has been used in several clinical trials and studies. No considerable differences in the efficacy and safety of Teefavir have been discovered.

Teefavir (Tenofovir disoproxil fumarate, Emtricitabine, and Efavirenz) is available in the form of tablets for oral use in a high-density polyethylene bottle containing 30 tablets. Store Teefavir tablets at 59°F to 86°F (15°C to 30°C). Keep Teefavir tablets away from the reach of pets and children. Do not place the bottle under direct light and heat. Protect it from moisture. Know the ways to dispose of the used and expired packs of medicines from a pharmacist. Women who are pregnant should not handle Teefavir tablets without protection like gloves.